bioBUBBLE Benchtop Enclosure for a cell sorter at University of Utah.

Read more about how bioBUBBLE enclosures contribute to increased longevity in SCID rabbits. 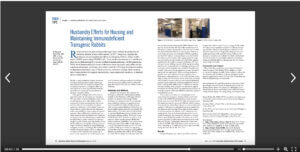 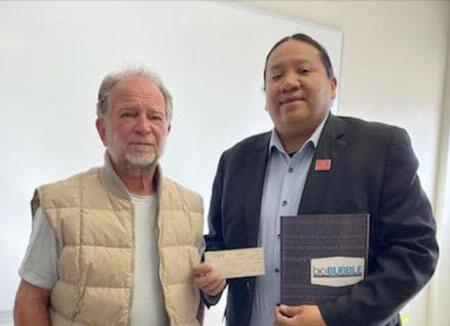 Chuck Spengler, founder and owner of bioBUBBLE, Inc., recently met with Kevin Killer, President of the Oglala Sioux tribe to set up an endowment focused on scholarships for students in environmental and health sciences. Chuck chose to work with the Oglala Sioux Tribe because of their historical connections to the land near Fort Collins. Currently the Sanctuary Scholarship fund will award two annual scholarships. Chuck is excited and honored to work with the Lakota Nation. He looks forward to building a long term relationship to continue his support of students in environmental and health sciences and to provide opportunities to youth in the Lakota Nation.
For more about the Oglala Lakota College and their mission “Rebuilding the Lakota Nation through Education” visit www.olc.edu.
For more information on the Sanctuary Scholoraship fund, please contact Marilyn E. Pourier, Development Director, Oglala Lakota College 605-455-6045 direct line mpourier@olc.edu.

bioBUBBLE worked with the Smithsonian National Museum of Natural History to create a 17 x 17-foot positive pressure cleanroom within a laboratory at the Smithsonian’s Museum Support Center that houses preserved biological specimens. This cleanroom allows scientists to extract and analyze ancient DNA from skeletons, mummified tissue, and tissue remains without danger of contamination. Learn more about how a bioBUBBLE cleanroom enhanced Smithsonian research.

A Note From the President of Transpharm

January 2017 marked our 9 year anniversary and the close of another great year here at TransPharm. With 17 new clients in 2016, the TransPharm family now spans over 6 continents. As a result of our continued growth, we were able to reach a major milestone in November: a total of $10M in revenue since I founded the company in 2008. Increased demand also allowed us to welcome some new faces to our team – Brianne Fiero (Associate Scientist) in April, and Brittany Dixon (Scientific Writer) and Emily Gilles (Laboratory Technician) in October.

2016 was also a year of physical growth. A 2,100 sq. ft. addition to our facility, including an expanded animal vivarium and a procedure room, was completed in May. This new space contains both a negative pressure room and a positive pressure room, with corresponding bioBUBBLE enclosures in each, meaning separate, dedicated areas for C. difficile and germ-free work, respectively. The renovations have already proven advantageous to our clients who currently work in the C. difficile therapy development field. Please contact us for more information.

Finally, I’d like to extend an open invitation to visit us here at TransPharm. We wouldn’t be celebrating these successes without our clients, and we’d love the opportunity to meet you personally and provide a tour of our facilities. Thank you for your business and we look forward to working with you in the new year. 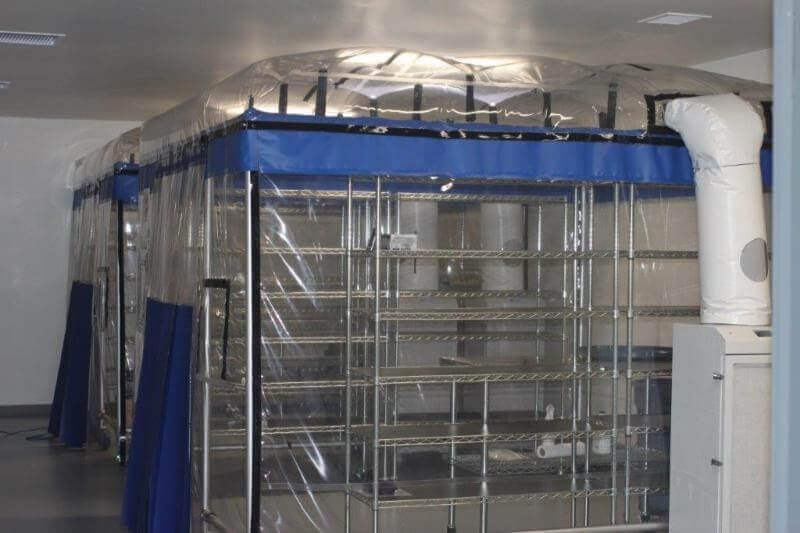 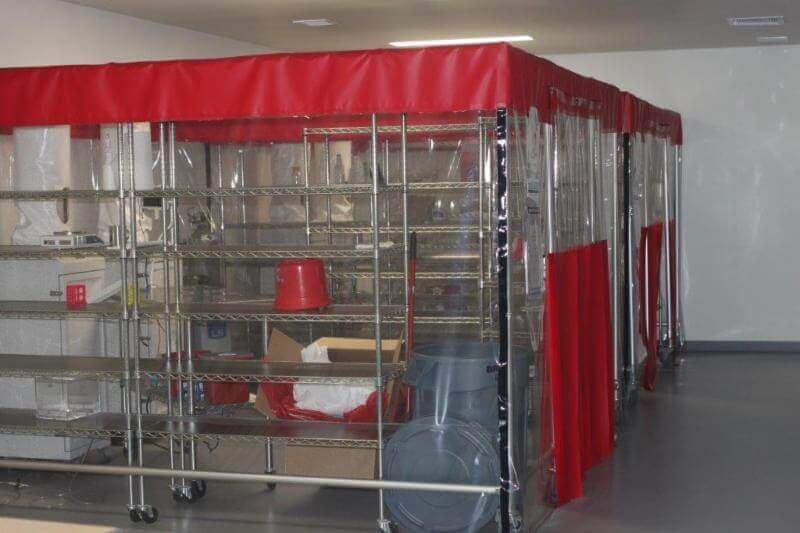 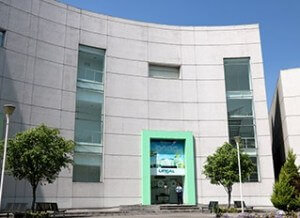 A view of the main access to the rodent facility building at CINVESTAV. 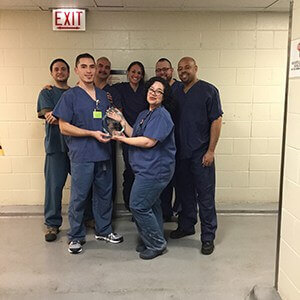 The Carlson Husbandry Team at the University of Chicago

(To learn more about our role in the CINVESTAV Project, click here.)

The TurnKey Awards were presented to the 2016 winners at the TurnKey Conference on May 24th at the Gaylord National Harbor Resort and Convention Center in Oxon Hill, MD (Washington, DC). The awards, given by ALN Magazine are in recognition of excellence in two categories: teamwork and facility design. At the awards luncheon, Robert T. Dauchy from the Tulane University Structural & Cellular Biology/Comparative Medicine Team, Betty Thierault from the Carlson Husbandry Team at the University of Chicago, and Jorge Fernardez Hernandez of the Centro de Investigación y de Estudios Avanzados del IPN were presented with plaques and celebrated as this year’s winners.

Also known as CINVESTAV, this Mexican non-governmental scientific research institute was founded in 1961. It’s Animal Care and Use Program offers services to 43% of all research departments who work in 375 active animal use protocols revised and approved by IACUC.

The brand new animal facility, known as UPEAL, was built and designed in response to the needs of the research community of CINVESTAV and other public and private institutions in Mexico. UPEAL was designed with animal husbandry flexibility, reduced energy and water consumption, and a low cost of ownership in mind and the four story, 27,749 square foot building exceeds industry standards. It was designed by Tea Arquitectos SA de CV and built by INGLUE SA de CV.

The facility improves the quality of animals used at CINVESTAV as models for biomedical research programs. It also increases the number of research scientific collaborations both throughout Mexico and internationally.

This is the one of the most advanced animal facilities in Mexico and Latin America. The design using flexible clean rooms, IVC housing technology, macro and micro environmental conditions with double HEPA filtration and its control and all support equipment for washing, disinfection and sterilization, made this facility unique in this geographical area.

“The new world-class building represents big improvements and exceeds industry standards in the region. The CINVESTAV animal care facility project has been a collaborator achievement in architectural design and construction by a group of local architects and engineers, headed by the direction of the Animal Facility Director, as well as all of the staff during the planning, design, construction, and commissioning processes,” wrote one recommendation.

With this facility, CINVESTAV´s animal care and use program guarantees for many years the animal welfare in a high quality environment for rodents and personnel, to support the advance of biomedical research at CINVESTAV and other Mexican institutions.

The Carlson Husbandry Team at the University of Chicago has faced many challenges throughout the last 12 months, including flooding, renovations, climate change, and multiple facility moves. As a result, the team generated multiple innovative ideas to help relocate animal models, preserve experimental data, and maintain homeostasis. They did all this, while caring for up to fifteen different species of laboratory animals, including aquatics and exotics. This means each staff member is cross trained across all facility species and housing areas, allowing the team to respond nimbly to changing species census and research demands.

The Tulane University Structural & Cellular Biology/Comparative Medicine Team was formed in 2008, when the chrono-neuroendocrine oncology program at the Bassett Research Institute in Cooperstown, New York, relocated to the Tulane University School of Medicine. During this process, the team noticed issues in animal facility light contamination at night, disrupting circadian rhythms in laboratory animals. A study based on this finding was published in JAALAS in 2011. Work by the team has been recognized for a high level of regulatory compliance with the USDA, OLAW, AAALAC, ACLAM, and AALAS.

Congratulations to our winners!

The number of genetically engineered mice models (GEMs) is growing rapidly due to high-throughput production strategies employed by the International Mouse Phenotyping Consortium (IMPC). Mouse repositories play an important role in promoting and distributing the models produced by such a large international project. The microbiological quality of these distributed models is critical as health status can alter animal welfare, validity and reproducibility of research data. As one of these mouse repositories, we faced endemic infection with opportunistic agents (Helicobacter, Pasteurella and Norovirus) that represent importation issues for researchers requesting strains from our collection. The solution to get rid of these undesired agents is to conduct embryo transfer rederivation procedures. Typically, decontaminations are performed in a different barrier with a higher health status.

Isolators within the parent facility are a viable alternative as they provide an elevated level of animal protection from surrounding environment. However isolators are operationally intensive, and not convenient for mice procedures. Clean rooms operating under positive pressure using HEPA filtration to provide protection for both housing and procedural areas, represent an option that is less labor intensive, and reducing operating costs. We report here the outcome of a 24-month program to rederive GEMs internally with a customized class 100 environment. This enclosure has been installed within our contaminated facility. Embryo-recipient females and rederived mice were health-screened to assess their microbiological status according to the FELASA guidelines. More than 50 strains so far has been successfully rederived free of Helicobacter, Pasteurella and Norovirus, the 3 agents endemically present in our facility with a high prevalence (76, 21 and 94% respectively). To date, 24 months of follow-up mice screening indicates that we achieved our goal of eradicating endemic infectious agents, for strains to be distributed from our repository, based on the use of clean room enclosure.

Besides the outcome of this rederivation program we also present a time/cost analysis between solutions to upgrade mice health status, which drive us in these times of financial limitations.

Learn more about this project.

Need help finding something? Try searching for a keyword here

Scroll to Top
We use cookies to improve user experience by remembering your preferences and repeat visits. By clicking “Accept”, you consent to the use of ALL the cookies. You may manage your preferences through “Cookie Settings” to provide a controlled consent.
Cookie settingsACCEPT
Manage consent

This website uses cookies to improve your experience while you navigate through the website. Out of these cookies, the cookies that are categorized as necessary are stored on your browser as they are essential for the working of basic functionalities of the website. We also use third-party cookies that help us analyze and understand how you use this website. These cookies will be stored in your browser only with your consent. You also have the option to opt-out of these cookies. But opting out of some of these cookies may have an effect on your browsing experience.
Necessary Always Enabled
Necessary cookies are absolutely essential for the website to function properly. These cookies ensure basic functionalities and security features of the website, anonymously.
Functional
Functional cookies help to perform certain functionalities like sharing the content of the website on social media platforms, collect feedbacks, and other third-party features.
Performance
Performance cookies are used to understand and analyze the key performance indexes of the website which helps in delivering a better user experience for the visitors.
Analytics
Analytical cookies are used to understand how visitors interact with the website. These cookies help provide information on metrics the number of visitors, bounce rate, traffic source, etc.
Advertisement
Advertisement cookies are used to provide visitors with relevant ads and marketing campaigns. These cookies track visitors across websites and collect information to provide customized ads.
Others
Other uncategorized cookies are those that are being analyzed and have not been classified into a category as yet.
Save & Accept